From the late 1970s through the 90s, Karl Haflich was the leader of the massive white supremacist criminal organization DOOM. An avid wargamer since his days in the U.S. Army, Haflich went by the alias “the Lich”, a powerful undead monster from the game Dungeons & Dragons.

The Lich lost his powers on 6 December 1999, when Doc Thoth destroyed their source: a gypsum statue located in DOOM’s headquarters. Now a normal human again, Haflich was arrested, tried, and received multiple life sentences. His lawyers successfully argued that as a non-super, he should be confined to a normal prison instead of sentenced to Stronghold.

In 2016, Haflich was diagnosed with advanced bone cancer and given an estimated five years to live. The former supervillain was discharged from prison under the Compassionate Release program and now lives in Pasadena, CA.

In recent years DOOM and the Lich have become icons.of the rapidly growing extremist far right, particularly the “alt-right” who revel in irony and 80s nostalgia. Now in his mid-70s and reliant on a wheelchair, Haflich is sought out by far-right celebrities and journalists for interviews and photo opportunities.

Haflich denies any involvement with the present-day violent white supremacist gang calling itself Knights of DOOM, though he has has met with its leaders. During a guest appearance on a popular far-right YouTube channel, Haflich referred to it as his “fan club”. 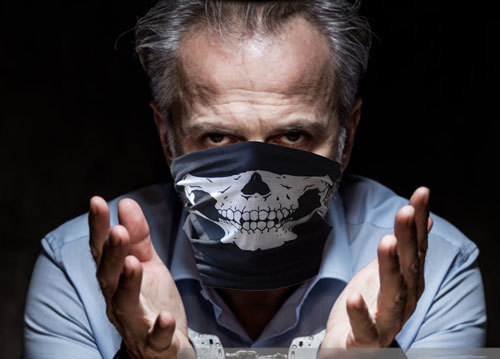